13 – ‘Victory depends on your ability to distinguish vulnerable points from invulnerable ones.’
14 – ‘The outcome of the battle depends on how you handle weakness and strength.’ 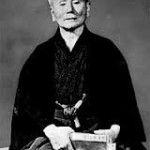 Both of these precepts concern your mental attitude in a fight, very important both inside and outside the dojo and in fights/sparring as well as in everyday life. Avoid your opponent’s strength and attack his or her weaknesses. Your style must be fluid. It must change, not only with each opponent and in each fight, but also as each fight progresses. You must utilise your stances and outmanoeuvre using your techniques correctly.

Watch your opponent’s movements; look for weaknesses in his or her stance, technique and speed. Remember that every attack has a counter. Watch for an opening and use it. What are they trying to do and why?

By moving a certain way or using a certain technique, are they leading you in to a trap, influencing the way you’re fighting for their gain? For example, your opponent might strike at you while leaving a clear opening for you to attack them. This might be an accident on their part – or they might be luring you into an attack they’re ready for. He or she will be watching for your weaknesses to use against you. You must adapt your reactions to your opponent’s actions, making them vulnerable and persuading them do what you want them to do without them realising it.