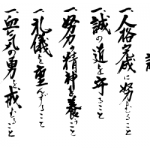 Standard translation – To be faithful

Bushido Hombu translation – To be true and sincere

Standard translation – To respect others

Bushido Hombu translation – To maintain control of my behaviour

The origins of the Dojo Kun is unknown, some attribute it to the “father” of Shotokan/Shotokai karate (Gichin Funakoshi) however it is accepted that it is likely to be far older than this.

In Japanese, each of the five lines is numbered “ONE!” to represent the fact that all are equally important.  At Bushido Hombu we expect Blue belts (5th Kyu) and above to be able to recite this Japanese version by way of further displaying their efforts to train within our ideals.

When reciting the english version there is no need to begin each live with the word “ONE!”.  We aim for all members to be able to pick up the English version as soon as possible after becoming a member.

There is also a very literal translation provided by Richard Amos of WTKO, which gives more meaning than the standard translations that we use in class (above):

Kun = Morals
Hitotsu = one (when counting something)
Koto = thing