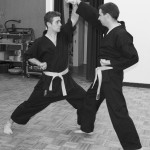 A mixture of cardiovascular and muscular exercise was used for the warm up, requiring the students to perform sets of moves such as knuckle push ups and then run the width of the hall before doing the next set. This sort of exercise started the class off with a burst of energy and stress tested each student to the limits of their comfort zone. I believe that it’s only when I reach this state that the exercise I’m performing has a constructive (rather than sustaining) effect on my physique and it is exercise such as this that enables the body to perform better the next time. The class were partnered up and a variety of pads were used to practice mawashi geri and mawashi enpi. I feel these two techniques can be complimentary when trained together as both are improved by correct activation of the abdominal muscles and as the two techniques activate this area in different directions, it provides a balanced abdominal workout.

Gyaku-zuki and ushiro-geri were then practiced on the pads. As the groups were rotating, each student performed the techniques on pads of varying density, this had the effect of illustrating to me the importance of a strong forearm in gyaku-zuki as I was caught out by one pad being softer than I expected (and as such I felt high resistance from the person holding the pad) which rolled my wrist (downwards, no pain experienced) from then I concentrated on activating my forearm muscles utilizing the twist of my arm and locking in. It was good to practice ushiro-geri as I have no experience in aiming the technique and after a quick bit of experimenting found the method which worked for me. Mawashi-enpi was practiced on our partners from which I learned to balance speed with power and use a low stance to put myself in a safe and powerful position.

Mawashi-geri was practiced in partners, showing how to attack the weak points inside of your opponent’s legs, a way of stopping their attack whilst keeping a safe distance perhaps, also a technique that could be used on someone we do not really wish to harm badly (such as an angered friend). Knife defence covered the earlier techniques but with over-sized knives, this was challenging and interesting and illustrated the versatility of the techniques as the long knives could easily be replaced with a plethora of similar sized weapons and still work. Some further techniques were also shown for use on a low thrust attack with a knife.

How I would teach or improve in my class:

This style of teaching where the group are placed in partners (or small groups) and given tasks around the room is one I enjoy using as it utilises the space and creates a sense of progress for the student as they make their way around the various areas.